It is good to get guitar techniques correct from the start. Ingrained poor habits can not only be hard to get out of, but also disheartening if it seems like you need to start again. If you think this applies to you, then at least I can tell you, that for a long time yet, even if you’ve been playing for a while or are an intermediate player it can be beneficial to see yourself as a beginner when it comes to learning new guitar techniques.

The posture for the fretting hand should be with the thumb more or less central on the back of the neck behind the fingers. Play on the frets with the tips of the fingers. The fingers should be independent and not push against each other. Let’s starts with a C major scale. 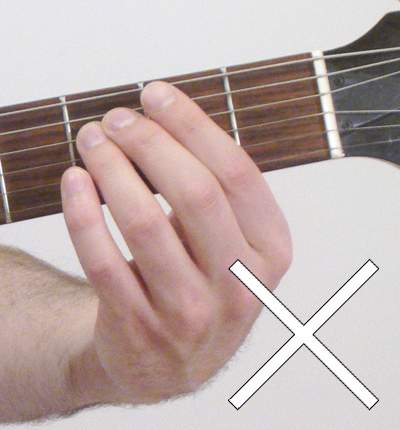 The first picture shows fingers touching. The middle finger is assisting the 3rd as it pushes down. This kind of thing is fairly typical among beginners. Ideally we need each finger to be strong enough to work independently.

In the animated example notice how each finger is independent while playing the C major scale. You should try to keep each finger separate and avoid them touching each other. At first you may need to play slower to achieve this.

In the animated example notice how each finger is independent while playing the C major scale. You should try to keep each finger separate and avoid them touching each other. At first you may need to play slower to achieve this.

Guitar technique is also about control between applying pressure to the frets when playing something and releasing the pressure when moving to something else, particularly when moving up and down the fret-board.

When playing power chords I sometimes notice beginners seem to drag their finger(s) up and down the fret-board from one chord to the next. This is because they aren’t releasing the pressure quickly enough before moving to the next chord and there’s too much tension in the hand. To improve on this I get them to play slowly and break the process down to separate movements of on / off / move / on / off / move etc. It may seem a bit mechanical compared to how when played within music it sounds flowing, but the process is the same, albeit at different speed.

Below is a basic power chord exercise; be aware of the process of “on” when playing the chord and “off” when releasing the pressure before changing to the next. Start slowly at first, using a metronome to stay in time can help. The rhythms are simple so you can strum each chord downward leaving you to concentrate on the fretting hand. 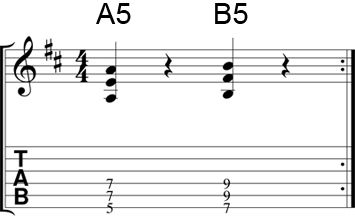 Note: To make it easier you could also play power chords with only the 1st and 3rd fingers, omitting the note played by the little finger.

Here’s another exercise with an extra chord for a change of 3 frets.

Here’s one with a chord change to different strings.

For this one play each chord twice using a down then up strum. 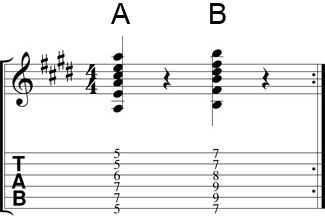 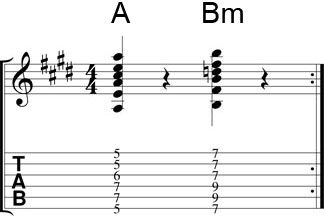